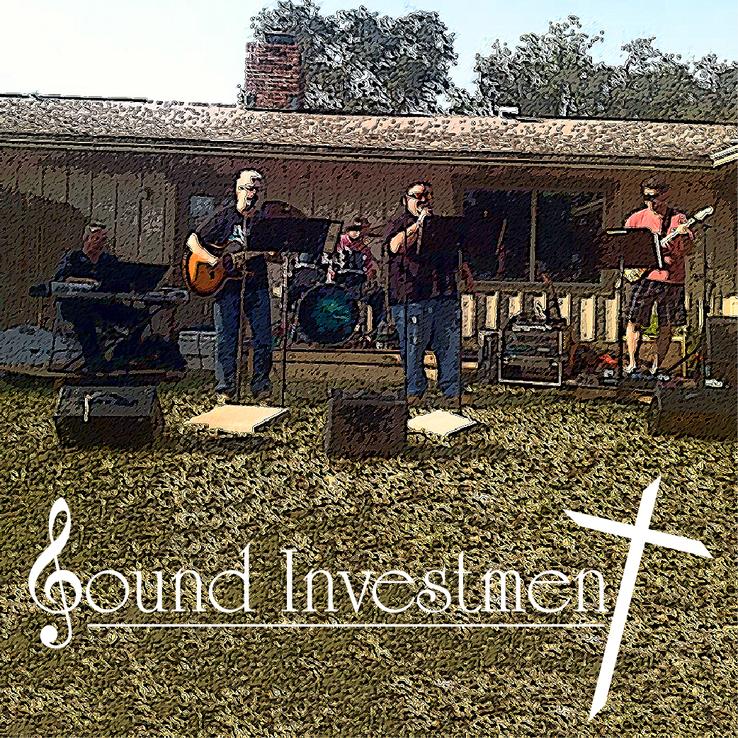 is a multi-functional group of Christians that presents God's word through music  and song. ​

Thank you for contacting us! If needed, you will hear back within 48-72 hours.

​It is, after all, what we as Christians are called to do.

The group originated in 2010 as a duo performed by John Lipinski and Beth Courtney.  As music ​and song writing progressed, so did the desire to "spread the Word" and the result was Sound Investment's first album, The Messenger.  To celebrate its release and introduce God's music, the group threw a free concert / meeting for anyone thirsty to hear about God. John and Beth asked several friends to join them in this very first "Gathering."  These friends included Joe Schafer on piano, Ryan Rincones on drums, Clint Braswell on guitar, David Norman on percussion, Roy Powers on keyboards, Brian Armbruster on bass vocal, and Ron Hahn for a guest appearance on bass guitar.

Several of these "friends" became officially part of Sound Investment after that performance.  Sound Investment and friends were now Sound Investment, the band.  John, Beth, Clint, Roy, Ryan, and Ron were the original band members. Although members have changed since it originated, the band performed for almost three years in Florida locations such as St. Cloud, Viera, Cocoa, Satellite Beach, Merritt Island, Titusville, and Melbourne.

In 2015, Sound Investment paused performances to work on the album, Gospel...according to John. Sadly, the group lost it's drummer, H, when he was called Home shortly after recording tracks for it. Gospel is dedicated to him and the joy he brought to the band.  CDs and the album are available for download via CDBaby.com and at any of our performances.

It's now 2018 and Sound Investment is again primarily a duo, with help now and then from "friends."  AND, work has begun on the next album, On the Fence.  John and Clint are very excited about this project.  Please keep checking here and our Facebook page for more info as things develop!

Sound Investment has gone through MORE changes due to busy busy schedules and personal lives.  Clint and John, the current backbone of the music and performance group, have decided to put together another album!  On the Fence, our working title, has just begun the very first stages of production.    Please keep checking back for news and updates.

Excuse the break while John gets married - wow!

Sound Investment, though going through some changes this year, is busy putting together new performance visuals.  We are so looking forward to begin performing again. Keep checking this site and our Facebook page for more info to come.  Blessings!

Gospel...according to John  is finally ready and available for download at CDBaby.com!  Here's the direct link www.cdbaby.com/cd/soundinvestment3.  Enjoy and please spread the word.